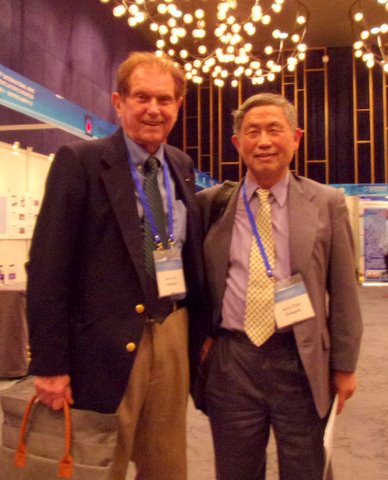 Ketler [on left] shown here with conference
organizer, Dr. Jerry Tien, Emeritus Professor,
of Mining and Resources Engineering at Monash
University in Australia
The 11th International Mine Ventilation Congress (11th IMVC) was held in Xi’an, China on September 14-20, 2018. Since the first IMVC was held in Johannesburg in 1975, there have been ten successful congresses in the United States, United Kingdom, Australia, Poland and India it has also become the most influential and participatory international mine ventilation event in the world.

The IMVC has long been a popular forum for ventilation researchers, practitioners, academics, equipment manufacturers and suppliers, consultants and government officials all over the world to explore research results, exchange best field practices, launching new products to build a better and safer industry. It has also served as a useful forum to attract and train future ventilation professionals and mine planning engineers, as well as for mining companies to search for better practices to provide better ventilation planning.China is a major mining country with around 100,000 registered underground mining operations, and ventilation plays a key role in the safe and effective operation of these operations.The 11th IMVC was attended by in excess of 200 international and domestic delegates from all branches of mining industry, manufacturers, research establishments and universities concerning mine ventilation, occupational health and safety management. The 11th IMVC was hosted by Xi’an University of Science and Technology and China University of Mining and Technology, and sponsored by China’s huge mining industry, equipment manufacturers and government. Both universities have made significant contributions in mine ventilation and played a leading role in the development of China’s natural resource and energy industry.